The moped driver asks, "Mind if I take a look inside?" "No problem," replies the owner. So the old man pokes his head in the window and looks around.
Then sitting back on his moped, the old man says, "That's a pretty nice car all right!"

Just then the light changes so the guy decides to show the old man just what his car can do. He floors it, and within 30 seconds the speedometer reads 160mph, suddenly he notices a dot in his rear view mirror. It seems to be getting closer! He slows down to see what it could be and suddenly something whips by him going much faster.

"What on earth could be going faster than my Ferrari?' the young man asks himself.
Then, ahead of him, he sees a dot coming toward him.

It goes by again, heading in the opposite direction and it looked like the old man on the moped. "Couldn't be," thinks the guy. "How could a moped outrun a Ferrari?!"
But again he sees a dot in his rear view mirror!

Ka-BbblaMMM!
It plows into the back of his car, demolishing the rear end.
The young man jumps out, and it IS the old man!
He runs up to the mangled old man and says,
"Oh my gosh, is there anything I can do for you?"
The old man whispers with his dying breath,
"Unhook my suspenders from your side view mirror


Husband: My wife is missing. She went shopping yesterday and has not come home !
Officer: Age?
Husband: I’m not sure. Somewhere between 50 and 60. We don’t do birthdays.
Officer: Height?

Husband: I’m not sure. A little over five-feet tall.
Officer: Weight?

Husband: Changes a couple times a year. Maybe dark brown now. I can’t remember.
Officer: What was she wearing?

Husband: Could have been pants, or maybe a skirt or shorts. I don’t know exactly.
Officer: What kind of car did she go in?

Husband: She went in my truck.
Officer: What kind of truck was it?

A Congressman took his son on a tour of DC. The kid was lightheaded with the spark of power in the halls of the Capital.

Well it was time to pack up and head home in a timely manner when the Son was overheard...

Damn it locked the keys in the car again.

You better hurry up dad, you left the top down and its fixing to rain.

How to get a time from a Baltimore Local?

Finally a stab at Mexican..

A Mexican man finds a job and asks the owner to hire him. The owner says he'll hire him ONLY if he can come up with a sentence using 3 words of his choice. The words are Green, Pink and Yellow. So the Mexican thinks for a second then replies (read in a Spanish accent) the phone goes Green Green, so I Pink it up and say Yellow?

Finally but not last... a little bit hamfisted so bear with me...

A Shop Boss, Dispatcher and a Trucker go to the bar.

The shop boss complains that hes empty. The trucker says thats ok I am loaded. And the Dispatcher cannot stand it anymore he said... Damn it children, I cannot send you anywhere for anything.

Two old drunks were sitting on a park bench when a big ‘ole Tom Cat sits down in front of them and starts licking (grooming) his private parts. One drunk asks the other drunk, “do you think you could do that without hurting yourself”? The other drunk takes one look and says, “HELL NO. That cat would scratch my eyes out if I tried”.

Two Tennessee rednecks are out hunting, and as they are walking along they come upon a huge hole in the ground. They approach it and are amazed by the size of it.

The first hunter says, "Wow, that's some hole; I can't even see the bottom. I wonder how deep it is."

The second hunter says," I don't know, let's throw something down and listen and see how long it takes to hit bottom."

The first hunter says, "There's this old automobile transmission here, give me a hand and we'll throw it in and see". So they pick it up and carry it over, and count one, and two and three, and throw it in the hole.

They are standing there listening and looking over the edge and they hear a rustling in the brush behind them. As they turn around they see a goat come crashing through the brush, run up to the hole, with no hesitation, and jump in head first.

While they are standing there looking at each other, looking in the hole and trying to figure out what that was all about, an old farmer walks up.
"Say there," says the farmer, "you fellers didn't happen to see my goat
around here anywhere, did you?"

The first hunter says, " Funny you should ask, but we were just standing here a minute ago and a goat came running out of the bushes doin' about a hunert miles an hour and jumped headfirst into this hole here!"

The old farmer said, "That's impossible. I had him chained to a transmission!"

A man walks into work on a Monday morning with two black eyes. Everyone wanted to know what had happened. The man tells his co-workers, “I was at church Sunday morning and we all stood up to sing. I noticed that the young lady in front of me had a dress wedgie in her butt crack. So being the gentleman that I am, I reached forward and untucked it for her. She responded by slugging me in the eye”. One of his co-workers then asked how he got the other black eye. He responded, “the young lady took such offense to me untucking the wedgie, that the next time we stood to sing I creased it back down her butt crack for her”.

Why does Burger King keep getting Dairy queen pregnant? He forgot to wrap his whopper. von. 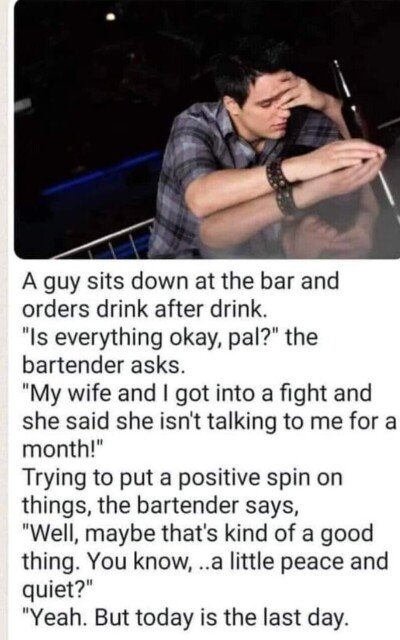 Steward of the Rock said:
Two brothers walk into the kitchen and sit down at the table for breakfast one morning before school. The mother asks the oldest brother, “what would you like for breakfast”?
His response back was, “give me a bowl of f***ing Cheerios”. The mother slapped him with the back of her hand so hard that it knocked him out of his chair and he laid on the floor crying in the fetal position. She then asked the younger brother, “what would you like for breakfast”? His response was, “you can bet your azz that it’s not a bowl of those f***ing Cheerios”!!!
Click to expand...

Gotta ask. Do you think they both ended up on the floor? von.

vongrimmenstein said:
Gotta ask. Do you think they both ended up on the floor? von.
Click to expand...

Had that been at my Mom's house, there would three bodies on the floor. Me, my brother and my other brother for teaching us to cuss. 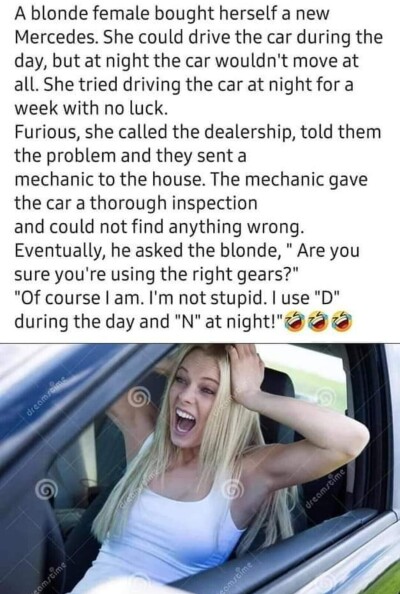 Don't forget. This is Diarrhea Awareness Week. It runs till Friday.

Blessed are those that can give without remembering and take without forgetting.
One day a florist went to a barber for a haircut. After the cut, he
asked about his bill, and the barber replied, 'I cannot accept money
from you, I'm doing community service this week’ The florist was
pleased and left the shop.

When the barber went to open his shop the next morning, there was a 'thank you' card and a dozen roses waiting for him at his door.

Later, a cop comes in for a haircut, and when he tries to pay his
bill, the barber again replied, 'I cannot accept money from you, I'm
doing community service this week.’ The cop was happy and left the shop.

The next morning when the barber went to open up, there was a 'thank you' card and a dozen donuts waiting for him at his door.

Then a politician came in for a haircut, and when he went to pay his
bill, the barber again replied, 'I cannot accept money from you. I'm
doing community service this week.’ The politician was very happy and left the shop.

The next morning, when the barber went to open up, there were a dozen politicians lined up waiting for a free haircut.

And that, my friends, illustrates the fundamental difference between
the citizens of our country and the politicians who run it.

As Ronald Reagan said: "Both politicians and diapers need to be
changed often and for the same reason.”

If you don't forward this, you have no sense of humor. Nothing bad
will happen, however, you must live with yourself knowing that
laughter is not in your future.
Click to expand...

Me and a few friends were at the bar last night telling lies and jokes. I asked them, If a epileptic was in the shower a went into a fit, what would you do. They all looked at me with that blank look and I said, Throw in the laundry. They all laughed and laughed. A guy sitting at the next table said, My brother was epileptic and died in the shower. Now I'm wishing the ground would open up and swallow me. Stunned and shaken, I asked if he drowned? He said, NO. He choked on a sock. 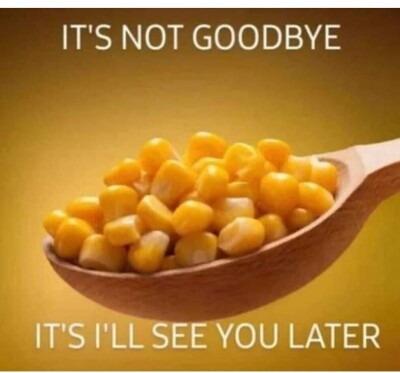