They will have to. They are over 100 employees.

Additionally OSHA is transcribed into the Federal Register book that formally gives marching orders to enforce it as of tomorrow in writing. That date is after Jan 4 2022.

I consider several things with any large employer with trucks. Many trucks. Thousands of drivers or even hundreds.

Half will leave. Worse case. Many office people will leave also.

Consider your Company's Shipper Roster and Customers nationally. When they are told that they cannot get trucks because there are simply NO drivers to drive them for now? Maybe the Senate sticks 18 year olds who know nothing into those tractors.

Its going to break America however you look at it across the board.

I know one company, about 100 trucks. Maybe a few more by now. They run pharmacy and high dollar medicines out of McKesson in Memphis to places like say NYC overnight teams.

If they had to park 50 tractors on the dawn of Jan 5th, McKesson will have to find other trucks that morning to run the medicines or the hospitals will not have their meds the following day by noon most likely.

They just will not have it at any price. You can cash in and sell all of Camelot but physically those needed meds will not be there to put into dying and the sick who then will decline.

It's going to be overturned by the courts it's a runaround Congress only they pass laws.
E

Get the shot. Didn't effect me at all. Booster...sure, which arm? Hope all you anti vaccination drivers look for another profession.
V

Be careful what you wish for. That driver that had to quit might be the next mechanic who does repairs inside your tractor. Leaving unvaccinated pathogens all over your dash & steering wheel. What goes around, comes around von.
V

Were you just released from prison? I ask because you joined TB in Feb 2015 & have only 107 messages. Just curious. von. PS You did have Wi-Fi in your cell block, right?

“We have received indications from senior Department of Labor officials that the exception for employees who exclusively work outdoors or remotely and have minimal contact with others indoors does exempt solo truck drivers from the mandate,” ATA President and CEO Chris Spear stated in a letter, obtained by FreightWaves, that was emailed to his membership Friday morning.

I am not ANTI Vaccination. I have been vaccinated all my life for pretty much everything except a few exotic asian problems.

In order to choose and decide to jab or not requires careful thought first then a decision made with free will and NO duress from anyone. To jab or not to jab. Thats freedom. Specifically medical freedom and your body your choices.

Unfortunately it includes a religious freedom between me and my God. I learned the new jabs engage in things that I consider Evil and God would consider deeply offensive in his sight. Essentially rewriting our blueprints in our cells to turn them into little factories of our physical death among other objections. God created us, he wrote the DNA within all of us etc.

Take away that freedom then there is no God according to the State or Country. Not for we the people. Thats inscribed in our Creed and Bill of Rights and some of the trampling going on now dates back to laws written in the Magna Carta as well.

Instead of rehasing the wholesale destruction of everything American with the mandates and so on by the Federal Government or more exactly King Biden and Democrats Leaership running amok for the time being drunk on power and so forth... seeking absolute control. If not destruction of the American People's freedoms across the board. Medical, financial, Livelhoods and maybe your own very life and future if any.

To resist now is a good time as any. Patriots have begged for decades, when? When? Well that is now. Not necessarily armed resistance. But a flat and sober refusual to engage in federal overreach, engaging Osha who have been turned into enforcers and heavies with a flawed and overabused Presidental Order that is a square peg into a round hole and disregards Congress's own right under Consitution to make Laws. This madate is defacto law once written into the Federal Register Yesterday. That is the laws of the United States in writing.

Thus the Executive have violated so many things its not acceptable. So its going to fall to the courts to assert what the Constitution limits Bidens power.

We have a short time. We are facing nothing less than a destruction of American Society after Jan in the darkest of winters.

The American Trucking Associations said Walsh's comments were "an enormous victory for our association and industry."

Based on what the labor secretary said Will the truck drivers that work the freight dock and the street both have to be vaccinated where the road drivers won't have to be? How about the city drivers who have a city street bed but don't normally work the dock but are forced to by management to work an extra hour or 2 will they have to be vaccinated? von.

None of that matters.

Any Business with 100 or more employees will have them Jabbed or no jobs.

They can twist and wriggle with exemptions this or exemptions that but the truth of the matter is this. IF YOU ARE A EMPLOYEE of a company larger than 100 souls you will be jabbed. Or no job.

Can you imagine OSHA standing in the office of Big ***** Express and tell Him that you have 150 drivers who did not Jab? Him says there is the exemption for solos and so on. OSHA might just ignore it and....

CAN BE MORE STRICTER than minimum requirements. Remember that one?"

Those with team drivers usually engaged in blood plasma or other really important and high dollar stuff will have to have jabs. IF one or both refuses, you dont have a team anymore.

Never mind going into a shipper or reciever who might require a jab, vax passport or god only knows what else going into 2022. If the solo has none of that. guess what? REFUSED. Go away. find a driver who is compliant and come back after a new appointment is set up later.

Big Dave said:
I heard Stew was at the Fort trying to give Judy the jab……
Click to expand...

Here at the Rock, we are still trying to heal from the “jab” that Judy gave us back in 2013 and 2014. That is when she gave us the “Slagle” disease. So far, there has not been a cure found for it. 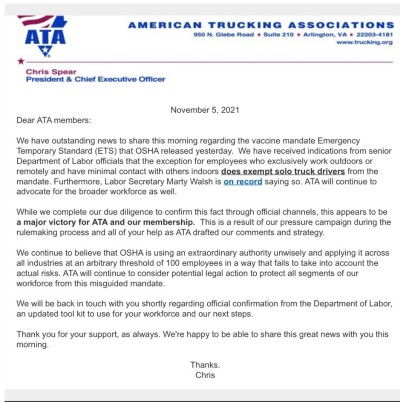 vongrimmenstein said:
Were you just released from prison? I ask because you joined TB in Feb 2015 & have only 107 messages. Just curious. von. PS You did have Wi-Fi in your cell block, right?
Click to expand...

108 now, I have a life other than social media. Grandkids hobbies and my wife. I get on this site to read and once in awhile post. Sorry if I offended you. Just spoke my mind.
G

Most of us are exempt.
At 042 the only ones that aren't is front office, the om, and mabey some in the shop.
Guys that work at a closed barn not so much though.